A photo of Prime Minister Shinzo Abe visiting a shelter in an area struck by Typhoon Hagibis (No.19 in Japan) on October 10th, 2019 was doctored to mislead viewers into believing that Abe shot this photo in a studio. The fabricated photo spread widely on Facebook around mid-March 2020. 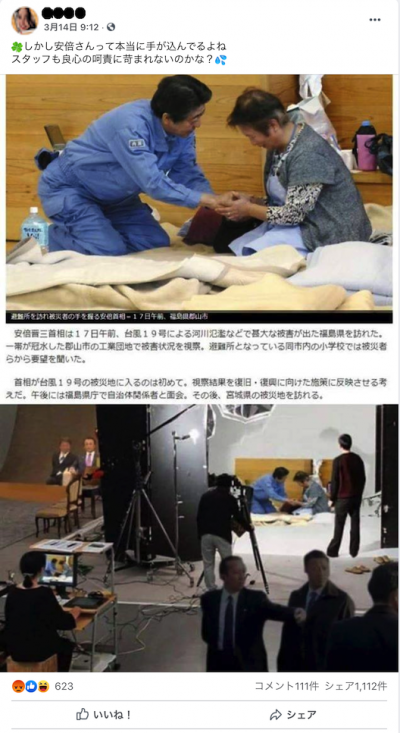 Upon verification, we learned that the original photo was taken by the newspaper Sankei Shimbun, and was published on its website on November 7th, 2019. Other mainstream broadcast media reports also confirm Abe’s visit in that area on the same day and therefore the Prime Minister actually did visit a shelter in Fukushima prefecture and met with the survivors of the typhoon.

In conclusion, the photo which went viral on Facebook was indeed a doctored version of an already-published photo by Sankei Shimbun and was misleading viewers into believing the visit itself was staged.

The doctored photo had spread in Taiwan purportedly as proof of Prime Minister Abe deceiving the public.

The FactCheck Initiative Japan moved to verify this photo in response to the request from MyGoPen, a fact check organization in Taiwan. MyGoPen published our findings in a fact-check article on March 22nd. The day after Chinese Television System Inc. (CTS) also broadcasted the result of this fact-check.