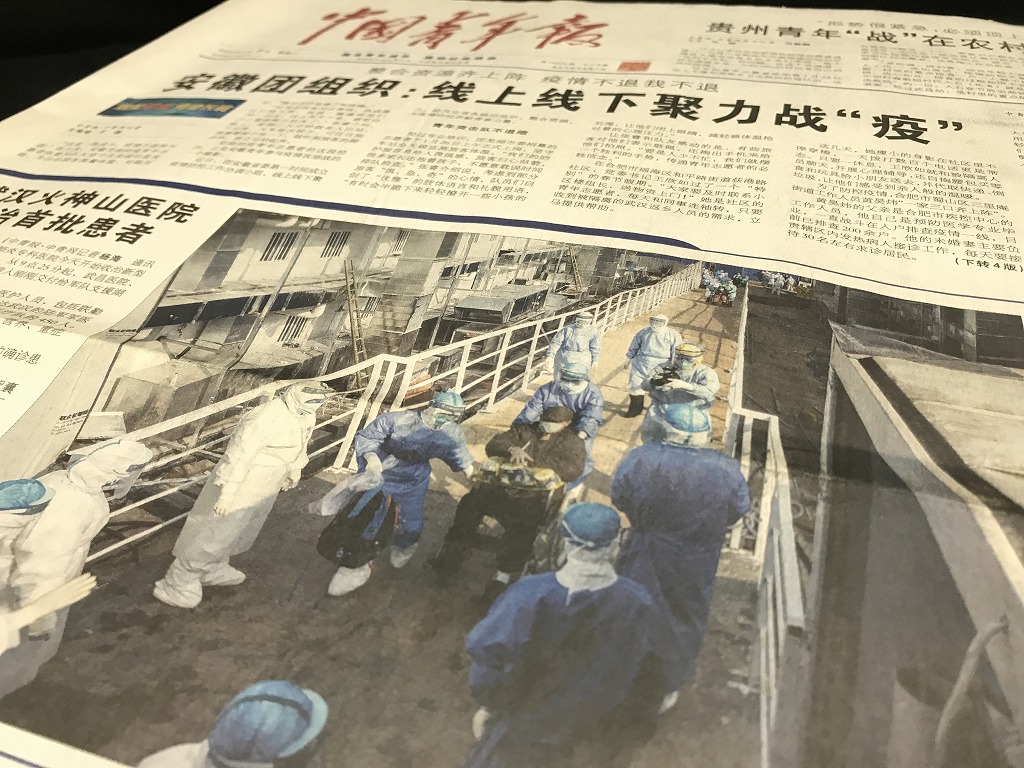 China was the first country to be hit by the coronavirus. We will examine how China dealt with this serious infectious disease and what kind of information they reported both domestically and internationally. As a matter of fact, China initially stated that the possibility of continuous human-to-human transmission was low.

In an announcement on January 11, the Wuhan Municipal Health Commission reported that by January 10th, forty-one people had been infected with the new coronavirus, of which one had died.

Since the disclosure of the outbreak of the “viral pneumonia of unknown cause” on December 31 of the previous year, reports regarding the infection had been irregular.

However, after January 12, the commission began summarizing and reporting the number of newly infected people and their treatment status within 24 hours everyday (although there were cases where the actual announcement came after midnight).

For example, on January 12, the announcement was as follows.

“From midnight to 24:00 on January 11, there were no new infections and four people were recuperated or were discharged from the hospital. No new deaths have been reported. So far, a total of 41 cases have been reported in Wuhan City, and six people have already recuperated or have been discharged. Seven people remain under treatment in severe condition, and one person has died. The condition of the other patients is stable and they are receiving isolation treatment at designated medical institutions. A total of 763 close contacts have been tracked. Of these, 46 have already been released from medical observation and 717 are under medical observation. No relevant cases have been found among the close contacts.

It is interesting to note that they refer to the size of the close contacts they tracked. This was continued in the presentation that followed.

Incidentally, the announcement on the 11th, based on the count up to the 10th, showed the number of “close contacts” was 739, so we can read the fact that the difference of 24 additional close contacts were found during the day of the 11th.

The announcements made by the Wuhan Municipal Health Commission from the 13th to the 15th all stated that there was no increase in the number of new infections or close contacts in the city within 24 hours on the previous day. The announcement on the 14th, however, was the first to mention a case in a foreign country.

This case in Thailand is reported as being pneumonia related to the new coronavirus from Wuhan. The subject is under hospitalization and in isolation in Thailand, and the patient’s close contacts, who have returned home, are being traced and are under medical observation.

The Wuhan Municipal Health Commission released a document titled “Knowledge on Pneumonia Caused by New Coronavirus and Q&A” on April 14, in addition to its usual summary of the infection, to explain the situation in more detail. (The actual time of the announcement on the website was 0:10 a.m. on the 15th). There were some interesting things written in the document that we could later look back on.

Q: Recently, a traveler from Wuhan was diagnosed with pneumonia from a new coronavirus infection in Thailand. Can you tell us the latest situation?

A: On January 13, 2020, one case of pneumonia from the new coronavirus infection from Wuhan was reported in Thailand. The patient in question is a citizen of Wuhan and is currently receiving treatment in Thailand.

Later, Wuhan Mayor Zhou Xianwang revealed that nearly 5 million people had already left Wuhan city before the city went into lockdown on January 23. In China, the movement of people had already started in early January ahead of the Lunar New Year (Spring Festival) celebrations on January 25. The patient confirmed in Thailand, a citizen of Wuhan, is believed to be one of them, and can be said to be an example of how the new coronavirus spread from China to foreign countries through people.

Q: Have any cases of human-to-human transmission been found so far?

A: According to the results of the current investigation, no clear evidence of human-to-human transmission (HHT) has been found, and although the possibility of limited HHT cannot be ruled out, the risk of continuous HHT is relatively low.

With regard to HHT, the January 11 announcement stated that “no clear evidence has been found,” but this is the first time the possibility of limited HHT is being mentioned. However, the statement reminds us that the “risk of continuous infection” is “relatively low,” as the infection passes the virus on to A to B to C. Even at this point, the commission effectively denies that the new coronavirus was highly contagious from person to person, and did not raise any alarms.

Q: Have you found any clusters within families?

A: Of the 41 infected people, one case of a cluster in a family has been found. Both husband and wife had developing symptoms and the husband, who got the virus first, is an employee of the South China Seafood Wholesale Market, but his wife denies having any history of having visited the market”.

Q: What are the characteristics of the infections that have been found? What are the trends in the prevalence of infectious diseases?

A: The 41 infected people are mainly male and middle-aged. The main symptoms in the early stage are fever and cough, followed by mild illness in the early stage, but the elderly and patients with underlying diseases are more likely to become seriously ill.

The majority of patients have a history of visiting the South China Seafood Wholesale Market, though a few deny visiting the market, and some have had contact with patients with similar symptoms. No infections of community transmission have been found so far”.

The household cluster mentioned here would have been a concrete example suggesting that the “limited person-to-person transmission” mentioned earlier may have occurred. In addition, from the content of the above announcement, it appears that the city of Wuhan was aware of several infected patients who had never visited the South China Seafood Wholesale Market, but the announcement gives the impression that the infected patients were limited to the relatives of those involved in the market. In addition to this, it also reported that “environmental samples” were collected in the market and some of them were confirmed to be positive for the new coronavirus.

This “Q&A” also explained the definition of close contacts, the necessity of 14-day medical observation for them, and measures such as disinfection after the closure of the South China Seafood Wholesale Market. As mentioned earlier, the Wuhan Municipal Health Commission began to announce the infection situation daily since January 12. The number of new infections, close contacts, people discharged from hospitals, and the measures taken by the authorities, such as medical observation, were “disclosed” in detail. There appears to have been a change in their sense of crisis and response after January 11, when the first death was announced.

On the other hand, Dr. Li Wenliang, who was reported in Japan as having noticed the outbreak of the new coronavirus at an early stage and sounded the alarm, had developed the disease on January 10, according to an interview with him in Chinese media. Dr. Li was reprimanded for “spreading lies” and was treated without  preventive measures. As a result, he died of the new coronavirus. At the time, the fact that human infection was occurring was well known in the medical field.

However, the announcement by the Wuhan Municipal Health Commission, even on the 14th, gave the impression that the possibility of human infection was low and that the infection was limited to those involved in the seafood wholesale market. It is impossible to tell from the text of the announcement alone whether the committee was unaware of the facts, whether they carefully judged the scientific evidence, or whether they deliberately did not mention it. But looking back on some of the facts have since come to light, it seems as if the official announcements were intended to play down the problem.